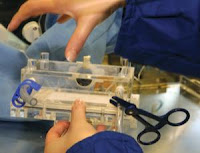 Carnegie Mellon University researchers develope a prototype system for minimally invasive surgery in weightlessness. "Blood and bodily fluids cannot be contained in zero gravity, which means there is currently no way to perform surgery in space without contaminating the cabin. This makes an extended stay problematic, says James Antaki from CMU. The Aqueous Immersion Surgical System, or AISS, is a transparent box that creates a watertight seal when it is placed over a wound and pumped full of sterile saline solution. The saline solution is held under pressure inside the AISS to prevent blood from seeping out of the wound. Airtight holes allow surgeons to access the submerged wound using handheld and orthoscopic instruments.
By varying the pressure within the AISS, the device could also be used to siphon up and recycle blood.
Researchers will put the system to the test aboard NASA's zero-gravity C-9 aircraft next week in the first of several experiments planned. They will perform surgery on an artificial coronary system filled with synthetic blood to test its ability to keep blood inside the body and out of the surgeon's field of view."
Along the article, I was also interviewed by New Scientist journalist Will Ferguson.
The article was also covered in the Hungarian media.