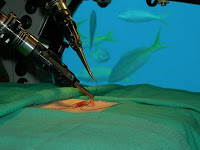 This post deals with the different problems emerging with telesurgery through long distances and in space.
The primary difficulty with teleoperation beyond Earth orbit is communication lag time or latency. Radio and microwave frequency signals propagate at almost the speed of light in space, however already in the range of long distance manned missions, several minutes of latency can be experienced. Planet Mars orbit 56 000 000 km to 399 000 000 km from Earth which means a 6.5 to 44 minutes of delay in transmission. In addition, for about two weeks every synodic period, when the Sun is in between Earth and Mars, direct communication can be blocked. In addition, the compression and decompression of the video stream takes app. 1 200 ms. NASA has conducted several experiments to examine the effect of latency on the performance in the case of telesurgery and telementoring. The NASA Extreme Environment Mission Operations (NEEMO) take place on the world’s only permanent undersea laboratory, Aquarius. It operates a few kilometers away of Key Largo in the Florida Keys National Marine Sanctuary, 19 meters below the sea surface. A special buoy provides connections for electricity, life support and communication lines, and a shore-based control center supports the habitat and the crew. Aquarius hosts high-tech lab equipment and computers, enabling astronauts, engineers and marine biologists to perform research, sea exploration and simulated space missions. 12 NEEMO projects have been organized since 2001, and there have been three projects focusing on teleoperation recently.
The 7th NEEMO project took place in October 2004. The mission objectives included a series of simulated medical procedures with Zeus, using teleoperation and telementoring [10]. The four crew members (one with surgical experience, one physician without significant experience and two aquanauts without any medical background) had to perform five test conditions: ultrasonic examination of abdominal organs and structures, ultrasonic-guided abscess drainage, repair of vascular injury, cystoscopy, renal stone removal and laparoscopic cholecytectomy. The Zeus robot was controlled from the Centre for Minimal Access Surgery, Ontario, 2500 km away. The signal delay was tuned between 100 ms and 2 s to observe the effect of latency. The results showed that the non-trained crew members were also able to perform satisfyingly by exactly following the guidance of the skilled telementor. They even outperformed the non-surgeon physician, but fell behind the trained surgeon. Scientists also compared the effectiveness of the telementoring and the teleoperated robotic procedures, and even though the teleoperation got slightly higher grades, it also took a lot more time to complete.
During the 9th NEEMO in April 2006, the crew had to assemble and install an M7 mobile surgical robot, and perform real-time abdominal surgery on a patient simulator. Throughout the procedure, the time delay went up to 3 s using a microwave satellite connection to mimic the Moon-Earth communication links. The M7 robot was also used to arrange and manipulate rock samples form the ocean’s ground. In another experiment, pre-established two-way telecom links were used for telementoring. The crew had to prove the effectiveness of telemedicine through the assessment and diagnosis of extremity injuries and surgical management of fractures. The effects of fatigue and different stressors on the human crew’s performance in extreme environments were also measured. Each of the 4 astronauts taking part in the experiment had to train at least 2 hours with the small wheeled MIS robots designed at the University of Nebraska.
The 12th NEEMO project ran in May 2007, and one of its primary goals was to measure the feasibility of telesurgery with the Raven and the M7 surgical robots. NASA sent a flight surgeon, two astronauts and a physician into the ocean. Suing operations were performed on a simulated patient in zero gravity environment to measure the capabilities of surgeons controlling the robots from Seattle. A group of three professionals guided the robot, using a commercial Internet connection, and transmitting the signals on a wireless connection to the buoy of the sea habitat. The communication lag time was increased till up to 1 s. The robots had to perform several simple tasks, such as suturing and Fundamentals of Laproscopic Surgery. The first demonstration of an image-guided remote surgery was presented with the M7 robot (using a portable ultra sound system), and live broadcasted on the American Telemedicine Conference in Nashville, Tennessee. The M7 was able to insert the needle into a simulated vessel by itself. (See this video report.)
Important lessons have been learned throughout the NEEMO missions. Medical Operation Requirements Documents of upcoming space missions are composed using the experience gained through these projects.

To ensure high quality visual and tactile feedback, high sampling rate must be used (app. 1 ms). Along with the high definition video feedback this has a significant bandwidth demand. Under regular circumstances a 10 Mbps connection is already suitable for teleoperation, however in the case of high definition, multimodal equipment a 40 Mbps two-channel link would be required. This may not cause any problem on the ISS that has been equipped with a 150 Mbps connection in 2005, but in the case of a Mars mission, NASA only plans to develop a 5 Mbps connection by 2010 as a part of the new space communication architecture, and upgrade it to 20 Mbps by 2020.
To meet the special communication requirements in space, the Space Communications Protocol Standards (SCPS) was developed and tested by the U.S. Department of Defense and NASA in the 1990s. SCPS uses similar architecture to TCP/IP, but it is more effective in handling latency created by long distance transmissions and the noise associated with wireless links. The SCPS exists as a complete ISO standard, and even fits the U.S. Military Standards.