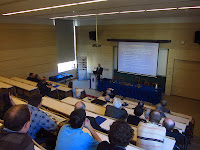 John M. Hollerbach, professor of computing, and research professor of mechanical engineering, at the University of Utah, director the Robotics Track, visited us as an IEEE RAS Distinguished Lecturer. He gave two exciting talks on rehabilitation robotics, how robotically actuated treadmills are improving the treatment for spinal cord injury patients.
"Patients with incomplete spinal cord injury (iSPI) often reach a plateau of walking ability in later stages of rehabilitation. We hypothesize that plateauing may be partly due to an inability of standard rehabilitation treadmills to depict realistic walking rather than to neuromuscular capacity. We trained four patients on the Treadport locomotion interface, which provides a relatively realistic display of real-world locomotion in a safe setting. There was statistically significant improvement in standard spatiotemporal gait parameters during training with the Treadport relative to training on a rehabilitation treadmill."

Such useful technology have been developed at other labs as well, such as the Lokomat, KineAssist at the Rehabilitation Institute of Chicago, at the University of Maryland, or the TheraStride. A similar system was introduced in the last guest talk at ShanghAI Lectures by Robert Riener: "Design Principles for Intelligent Rehabilitation Robots".