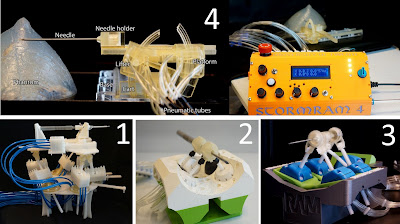 "University of Twente (UT) in the Netherlands has unveiled what it says is the smallest, most accurate 3D printed biopsy robot in the world: the Stormram 4.
A biopsy consists of the medical removal of tissue from a person, to determine the presence, or extent, of a disease, like cancer; the tissue is then examined under a microscope by a pathologist. Breast cancer, which is the most common form of cancer in women, can be diagnosed by inserting the biopsy needle into a patient’s breast and taking a sample from the abnormal tissue (lesion); this is typically referred to as a needle aspiration biopsy.
The UT biopsy robot is driven by rectilinear (moving in a straight line) and curved air pressure motors, and according to UT, is a “stimulus” for the whole phase of diagnosing breast cancer. It offers quicker, more accurate diagnoses with one, thin-needle biopsy, thanks to its accurate needle control and real-time MRI scanning; the latter is what makes the Stormram 4 so unique. While we hear a lot about metal 3D printed robots, UT worked with Ziekenhuis Groep Twente (ZGT) to 3D print the Stormram 4 entirely from plastic, which means the robot can be used in the magnetic field of an MRI scanner.
If a biopsy is completed during a breast cancer scan in an MRI, the accuracy goes way up; utilizing robotics instead of relying on the human hand to control the biopsy needle also helps with accuracy. The current version of UT’s biopsy robot is smaller than the previous versions, so it can fit inside an MRI scanner’s tunnel; 5-meter-long air pipes control the Stormram 4 from outside the scanner.
Linear stepper motors were used for the first two versions of the Stormram, while the third employed rotational stepper motors. Vincent Groenhuis, MSc, Dr. Françoise Siepel, and Prof. Stefano Stramigioli from UT’s Robotics and Mechatronics (RAM) lab developed Stormram 4; the team also collaborated with ZGT radiologist Dr. Jeroen Veltman, to make the design usable for clinical practice, and Ave van der Werf from Machnet B.V., which specializes in MRI coils.
The team’s Stormram 4 robot recently competed in the Surgical Robotic Challenge, and came away with an important award, at the international Hamlyn Symposium in London, which is one of the most important events in the world when it comes to robotic surgery. MRI scanners offer very accurate detection and visualization of abnormal tissue, and you can’t start treating a disease until you know for sure that it’s there and how far it’s spread. Plastic medical robots, like the Stormram 4, offer mechanical accuracy that doesn’t miss, and are not an issue for the powerful scanning machines. With any luck, this kind of medical robot will soon become a mainstay in hospitals around the world."