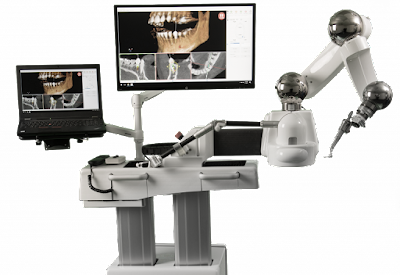 We reported some months ago about the first dental implant robot--Yomi. Now here are some updates:
"Neocis, a Miami startup wants to bring its Yomi robotic system to bear upon the field of dental implant procedures.
In May, the company won the medical devices track of the MedCity INVEST Pitch Perfect competition in Chicago, that was judged by Renee Ryan, vice president, venture investments, Johnson & Johnson Innovation – JJDC, Erik Halvorsen, director, TMC Innovation Institute and the TMCx accelerator, and Michael Wasserman, managing director, H.I.G. BioHealth Partners. The Yomi robot won clearance from the Food and Drug Administration in March.
“With our system, you can just go into the software and bump the plan over by a millimeter or two and now you have a completely new plan that the robot will guide you through,” co-founder & CEO Alon Mozes said.
The dental implant market is set for rapid expansion. Here’s a chart that shows that between 2013 and 2024, the market is projected to grow from a little over $3 billion in 2013 to 6.81 billion by 2024, according to Grand View Research.
The system also provides haptic feedback — in other words, the surgeon knows by touch and feel through sensory feedback provided by the robot where in the mouth the drill is moving because bone will feel different than softer tissue, for instance.
The system costs $150,000 up front and Neocis charges a per implant fee that Mozes declined to disclose. The goal is to sell 10 by the end of the year and Mozes expects the company will sell out pretty soon.
Unlike other startups that may have to be dependent on reimbursement regimes to find success, Neocis needs to convince surgeons to see adoption. Dental implants remain an elective procedure not covered by insurance, and no other approved robotic device is on the market.
Mozes’ background in robotics may serve to win some confidence. He was a principal software engineer at Mako Surgical, which Stryker bought in 2013 for $1.65 million to do robot-assisted joint replacements.
But there are some skeptical surgeons out there who wonder if there truly is an unmet need. A North Carolina specialist put it like this on his practice’s website after a November 2015 Miami Herald article featuring Neocis was published:
"With success rates well over 95% for dental implants, and dental implants lasting ten years, twenty years, or more, results are already good. And with most failures being related to patient factors like gum disease, smoking, or just failure to integrate, it’s unclear how a robot could help."
That was nearly two years ago and minds could change. But Mozes is aware and ready to face the challenge.
“You can’t just make a robotic surgery system and expect it to take off,” he said. “It has to be tailored for the particular procedures or market that you are trying to enter.”"

Katie Duncan said…
I'm impressed reading about the work done by the team of Yomi Robot for dental implants. I agree with the point made that robotic surgery system needs to be tailored according to a particular need. Thank you for the information. Orthodontist in Mumbai
October 11, 2019 at 12:53 AM