In vivo tissue regeneration with robotic implants from Harvard 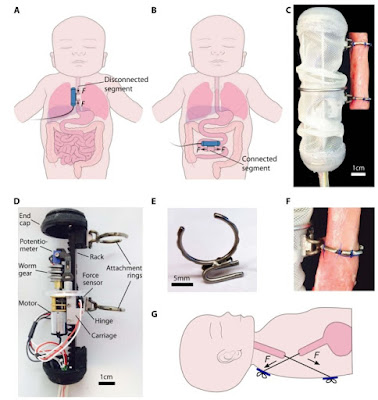 Pierre Dupont's Pediatric Cardiac Bioengineering Laboratory has a long tradition of innovative robot designs.
"For over a decade, my group has been designing medical robots with the goal of raising the skill level of the surgeon who operates them. But my dream has always been to make robots that could live inside the body to help the body repair itself with minimal supervision from the surgeon on the outside.
One application is growing new organ tissue. My colleagues at Boston Children's Hospital work with babies who are born with a gap in their esophagus. If the gap is less than 3cm, they can sew the two ends together to solve the problem. But if the gap is larger, they need more tissue to fill the gap – which they grow through mechanical stimulation. They put the two ends of the esophagus under traction and each end lengthens closing the gap. This approach works very well, but the child has to be continuously paralyzed and sedated for the several weeks it takes to grow new tissue. It also takes a lot of experience to know how hard to pull on the tissue to get it to grow, but not pull so hard that it tears.
This is where a robotic implant can help. We designed a device that applies forces in such a way that paralysis and sedation are not needed and made it smart enough to precisely and adaptively control the forces that it applies. We tested it by lengthening the esophagi of pigs and proved that the lengthening was due to actual organ growth – not stretching."