At the end of September I was privileged to get a semi-private tour to Intuitive Surgical’s headquarter in Sunnyvale California. (Eventually, two of my friends from Hopkins joined the program.) Intuitive is located in Silicon valley, close to the Caltrain on Kifer road. The main facility was acquired from HP, and has been extended significantly. Currently, there are app. 5-600 employees on site, the other 1300 are located at the strategic logistic centers around the world, travelling for sales, or sitting in another Intuitive building along Kifer road. People at the “campus” are divided between the manufacturing, support, sales departments, the engineering research center and the management.
Simon DiMaio, applied research manager, devoted much of his time to guide us around. First, we went to the dry demo room in the main building (beautifully decorated with a lot of tools), where they have a dual consol setup (sometimes touring around the country) equipped with the simulator module. We did some simple tasks with dual-console cooperation, and were able to try some of the MIMIC skill training programs. These were developed in collaboration, and through them we will be able to far better understand human learning in surgical procedures. Intuitive has a couple of “wet” operating room as well to train surgeons (and they were all busy at the time of visit.) The main building also features a huge map with all the da Vinci systems’ location (quite busy in some parts of the world), and a wall with hundreds of granted patent placards—quite impressive.
(I gave a lunch seminar talk—mostly about the emerging da Vinci competitors—which you can access here.)

The next part of the tour was to the new manufacturing facility, the first Intuitive building raised from scratch. (It was opened by Rep. Jackie Speier, Mayor Melinda Hamilton this summer.) All manufacturing (assembly) take place here on the first floor, while supply chain management and support is on the second floor. The rooftop is entirely covered with solar panels, making it the largest array in the area. Intuitive has a separate plant for tool manufacturing in Mexicali, Mexico established in July 2008 with 60 workers, and later enlarged significantly.
The current throughput of the main factory in Sunnyvale is enough to serve the demand (over 350 units/year) in one work-shift. The complete integration of a da Vinci Si takes two days, but they are ready to sell and install a robot anywhere in the world within 24 hours of purchase.
In the plant, first, they test every pre-manufactured part (~30K) incoming from various partners form all around the world: 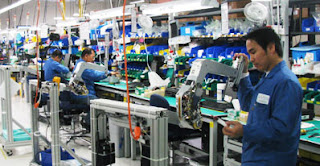 The assembly of the arms is done entirely by hands, cabling, soldering, integration is done by the skilled workers (also trained to replace each other if need be).  There are approximately 80 working cells, and some steps take up to 1-3 hours.
Having seen all of that what’s under the panel increased a lot my appreciation for the designers. It’s also true that the Si version incorporates a lot of upgrades and tweaking unseen to the user, but making e.g., servicing of the robot much easier.
Thorough testing follows every stage for mechanics, electrical functionality and capability. Once the parts of the arms are assembled, they are undergoing a controlled motion cycle (overnight) that moves all arms all around the workspace to identify any malfunctions. It’s like a dance of the robot, and looks very cool, since the arms stretch a lot further than during regular operation. Naturally, all software procedures are also tested on the actual system.
Last comes packaging, which makes the system look really big! There were like a dozen boxes waiting to get loaded into trucks. "Our sales cycle is not smooth. We sell the majority of units in the last month of a quarter," explained Dr. Major, manufacturing director of Intuitive in an interview given to Forbes.
The back section of the plant is a “medical grade clean room”, where the manufacturing and test of new tools is happening. Inspection of returned robot and retrofitting of the older models also take place in the building.

Image credit: obviously, I was not allowed to take pictures in the plant, this is all I got (from Forbes.com) I could dig out of the Internet. The Mexicali one is from Maquila Watch, and the opening is through Sunnyvale News. Simon DiMaio.

If you have more info about the manufacturing of the da Vincis, let us know!